You can help by fucking finishing it.

Journey Quest (often referred to simply as Journey or JQ) was an epic quest by Lucid in a world of his own design. Journey's one of the better known quests due to a combination of drawing quality, gripping narrative, and the existence of a controversial antagonist that has tgchan split between two opposing forces of Fan Dumb.

But fret not, a comic is in the works!

More information on Lucid's world can [allegedly] be found here.

The Heroes of our story.

Take control of Demesi of Angoldas and help guide him on his way through an unfamiliar world in his attempt to return home. 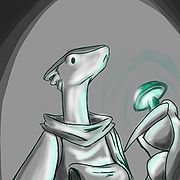 A young Nedynvor lad, who on his first solo trip away from his home island, awakes to find himself mysteriously at the bottom of a pit inside a cave. Completely out of his element, and not knowing anything about how the world outside his island works, he sets about exploring the tunnels, looking for a way home. Upon finding the cave to have been somehow sealed, he is left with no recourse but to venture further into the depths of the cave. A Kren merchant set up in the cave system informs him of a nearby Lohrke settlement. Demesi sets out to seek their aid to get himself back home.

Tav Unt'bel is a volunteer soldier in the city militia of the Lohrke city located in the cave system Demesi finds himself in. He has been waging a one man guerrilla war against an invading force in an attempt to buy time for the other inhabitants of the city to have made their escape through the the Evacuation Tunnel. He was originally the loader of a two man weapon team wielding a Shock Lance, however, his partner has since passed away in the line of duty. Tav has taken up their Shock Lance himself and now runs it as a one man army fighting against the invading Engsami forces. 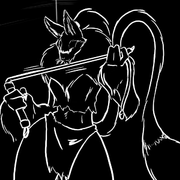 Aggeia is a Jungle Lazuhrek Demesi encounters in a neighboring dungeon cell. She assists Tav and Demesi in escaping from the Engsami stronghold. She has been sent there by her superiors, the Hat'kal, for a mission, but is reluctant to carry it out, or inform her new comrades of what exactly it is. She possesses a silver tongue and is quite flexible and able to squeeze through many locations one would not expect her body to fit through. She loves the taste of fruit. 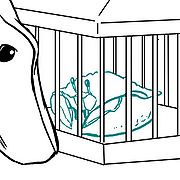 Binky is a Shocker Crab, a creature indigenous to the caves Demesi wakes up in, purchased from the Kren merchant via trade. Originally intended to simply be a tool used for some puzzles in the quest, the author found it difficult to actually come up with puzzles, and as such, created short "Crab quest" style chapters where the participants took control of this diminutive, shocking hero. Binky does not possess much brain meats, being a simple crab, but can launch bolts of electricity a short distance from his claws, and find his way into small locations.


General Kyaos is a winged type Engsami, and the leader in command of the invasion force raiding the Lohrke city. She rides on the back of her partner Ga'nneda, using his bulk as both a defensive tank, and powerful weapon. The two make a formidable team. Ga'nnedac is usually fairly slow to react to things, being a large turtle type Leviathan Engsami, but with Kyaos directing him and providing an extra pair of eyes, he's a true monster, and his drive to protect Kyaos makes him almost unstoppable. Perhaps the link between the two is more than just a simple work relationship?


The Admiral is the leader of the Denjold clan of Engsami, a ruthless band of land pirates who primarily deal in the slave trade. Kyaos is one of his top generals. He's more of a command from the rear leader, not due to lack of ability, or courage, but to a "what are subordinates for?" mentality. Alternate names he is known by are "Scourge of the Sands," and "The Great Dragon of the Desert," among others. He has led his pirate clan to become the most feared Engsami in the desert; so much so that even the mighty Hat'kal empire fears the name "Denjold."