The Quest deals with the sergal Goshen and his companion Aphek. The focus changes between those two, depending on the situation.

It's situated on the Vilous continent of the Unified setting, with additions like Agudners and Talyxians. 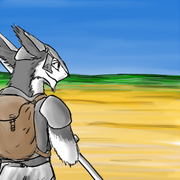 Goshen Rane Atral, a northern Sergal Raider. He's very large, even by Sergal standards and is very skilled with his guisarme.
Avoided, against all odds, dying of overheating. 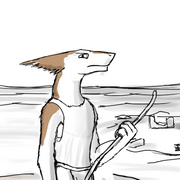 A southern Sergal slave. Used to belong to Koth, but is now according to "Finders Keepers" property of Goshen. Seems to be rather educated for a slave, including being able to read and write and also speaking the language Anglic. 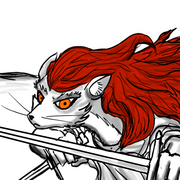 A Talyxian bandit or assassin. Currently occupied by being the mysterious nemesis of Goshen. Seems to be very skilled in close combat and stealth tactics. She will fuck your shit up. 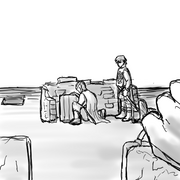 Human bannermen. Killed and later turned into jerky by Goshen.