Welcome to Aliena Affinitas, for all your interspecies needs. Lonely human(oid)s have recently been discovered by a vast, technologically advanced multi-species space-faring civilisation. Now they want to fuck aliens. And eat pizza, which is a universal constant.

The information presented focuses on the characters of the reboot. While some of them may bear resemblance to characters from the original, there is no guarantee that information canon in one is also canon in the other.

A male albino Burettian musician. Lean, slightly feminine as well as confident, vulgar and a rebel, he's always been good at reading people. He plays the synth in his band, which he came to the planet with, and has been able to stay afloat by playing gigs with them. He loves music above all else. Normally quite sensitive to sunlight, the twin suns of this planet have caused fewer problems than normal, probably because of the dome that surrounds the city.

Tristan's roommate. A small, slightly chubby Burettian. He is near-sighted as well as a bit timid, shy and intelligent yet friendly. He works as a computer engineer and he loves to play role-playing games, both physical and digital.

Sir Ztolteskanx tol Xai, aka "DragonKnight". A male Raolme (a blind quadrupedal reptilian) seeking freedom from his restrictive family responsibilities. His family has been setting him up on dates, much to his displeasure. His full title is "Sir Ztolteskanx tol Xai, chu ton o Ankh, Metre of Etrall, Est de zartel o Xaito, the second", which roughly means "Sir Ztolteskanx of the family Xai, minor duke of the river Ankh (he owns about 4cm of it), voter of Etrall (Etrall is a democracy), twice removed blood son of the Xai family." 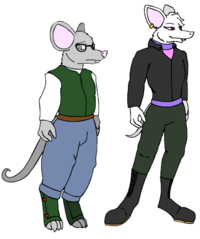 A species new to interstellar society. Appear to be fairly standard humanoids with rodent appearance. Apparently unusual for having a single central heart.

Relatively small quadrupedal reptilians common in interstellar society. They are blind, but have a good sense of hearing and smell, and can navigate and recognise people by echolocation, though strong sounds and smells can disorient them. Their stranger adaptations include malleable bones, the ability to extend and retract bone structures at will, and to move all their internal organs. Most cameras appear to come with a technology called "Sonarsync" which allows Raolme to hear pictures taken with them. Their teeth are both sharp and carry a local paralytic venom. They mostly eat insects, and share biological chirality with Burettians. They also have distributed cardiac systems, approximately a hundred muscles for pumping muscles distributed throughout the body. This is apparently normal in interstellar society.