“ This city needs someone. It yearns for someone to come for it -
to plunge deep into its bowels and stop only when it is satisfied -
when all that remains is goodness and the warm fuzzy afterglow of justice...
I think I can satisfy those needs.”

Dong Quest is a short first quest penned by The Littlest Emo as an attempt to break into the quest-running game. It follows Jack Hammer (better known as Dong Man), a penis-themed superhero, on his seemingly random bouts of crime fighting. The art style attempts to mimic typical cape comic books.

Dong Quest reached a conclusion, albeit a weak one. There are whisperings of a potential sequel, but nothing concrete. It may be comforting to know, however, that a good dong does not stay down for long. 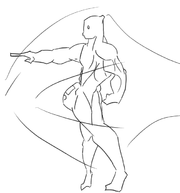 Our muscular and often meat headed hero. Known for not thinking most plans through, natural combat prowess and never hesitating to squeeze into a tight situation. Not much, if anything, is really known about his normal life, however his hero self seems to be well established in the scene. He has several foes, his own car, the "Crotch Rocket", and a few contacts. Although he quickly angered most of them thanks to his, uhh, quick thinking. Despite being caught off guard more than once throughout the quest, he proved to be more than capable in a good one on one night stand fight. 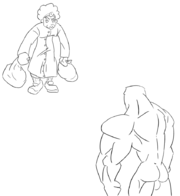 One of Dong Man's most feared and perverted foes. He doesn't hesitate to go for a cheap, underhanded, and dirty blow against his foes, as quickly shown in his fight against Dong Man. Agile, wise, and a little Sadist, he is no foe to trifle with. 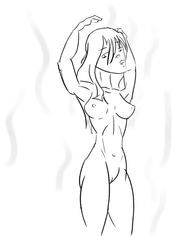 Our first opponent, quickly apprehended and freed from the tyranny of The Proctologist, she became Dong Man's primary informant and assistant throughout the quest.

An Ass in the most literal sense possible, known for doing one of the worst wrongs you can do upon a man. Jacking he ride. Thankfully a firm spanking taught this ass a lesson. 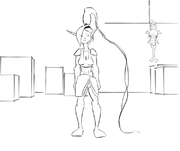 Dong Man's feminine, beautiful, and more agile counterpart and Big Bad of the quest. Shi possess a bit less the strength that Dong Man has, but with far more control over her powers and a bit more of a planning mind. 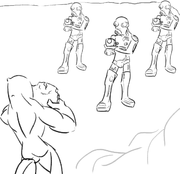 Bondage goons, likely hired by the Dick Girl. Deformed and hideous under their mask, and nearly incapable of speech.

Proprietor of a sperm bank, and apparent expert in sperm. He is quickly angered by Dong Man's unintentionally aggressive behavior. He is likely the most normal person throughout the quest.

Friend and fellow crime fighter, Trojan Man is initially mentioned early on as having been missing for several weeks. He is later found in the hostile care of Dick Girl and is eventually freed. However despite this, he never has the chance to enter the fight before Dong Man reaches the climax of the battle.