A quest by Cirr. In a decaying complex of unknown age, on an unknown world, survival is everything for those caught in its unending internal war.

The first drone to be created and led by the subsystem group TG-CN, Kata is a well-trained engineer with a large amount of survival knowledge, but completely hopeless when it comes to combat. She is eager, helpful, filled with respect for her superiors and more than a little naive. She also possesses an iron will - despite every hardship she has suffered so far, her faith in those she trusts is enough to drive her onward. She also has a small monitor inside her back, which is acting as a means for the monitors to communicate with her whenever she is under mental duress.

A medic with some marksmanship skills, Tene is typically calm, collected, and approaches his work with a clinical efficiency, regardless of whether that work is patching someone up after a combat or shooting a robot until it doesn't move any more. He tends to spend spare time lost deep in thought, using the enhanced cognition systems in his helmet to their fullest. He was once a member of a drone revolution, which collapsed for unspecified reasons. 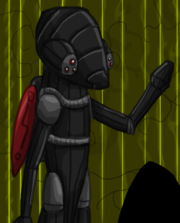 The leader of the team assembled for Kata's first mission. Cantankerous, cynical and relatively the last drone anyone would expect to be chosen to motivate and lead a team, Seto clearly knows more than he is letting on about the various hidden secrets of the complex and their factions. Appears to have some connection to the monitors. 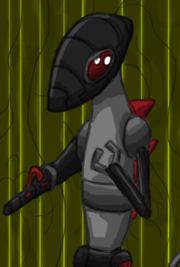 A drone who thinks highly of herself and her skills, Rito considers a great deal of what she encounters a minimal threat, and has a tendency to charge recklessly into situations she feels able to deal with. She thinks highly of the few drones she considers trustworthy.

A rebel machine who stole top secret weapon plans from its own creator, modified them, and aims to use this weapon - a means to change drones into crazed monsters - to build its own army. Considers itself a "creator of new life in a complex of recycled, archaic designs". Just a little crazy. May or may not be dead.

A member of a species that lives solely within the systems of the complex, known as "system space", !!9-33 ran from its home after its parent helped it to escape, and has been fleeing ever since. Now has a body in real space, thanks to Kata's advanced engineering skills and a storeroom full of parts.

The first of six drones to be subjected to Commander 48's weapon. A combination of the weapon and her regenerative nanomachines caused Seri to lose control of her body and grow to fill the room. After the room was subjected to a subspace explosion, Seri was able to regain control over her body and fight off the slow death she may otherwise have faced.

The only survivor apart from Seri of the drones affected by 48's weapon. Relatively quiet, primarily because he is unable to speak coherently. With a damaged body as he slowly succumbs to 48's weapon, his future is uncertain.

Central Network's long-term plans are unknown beyond either defeating or outright destroying Network Prime. It creates cyborgs it calls drones based off of sapient organisms grown in its home sector, merged with cybernetics. It seems to be blissfully unaware that most of its drones either dislike, hate or actively outright work against it. It is composed of multiple subsystems which are themselves stand alone minds, making Central Network at once an individual intelligence and a collective at the same time.

Network Prime's goals were initially assumed to be the eradication of all organic life in the complex, and the reclamation of what it considers to be its rightful territory (ie. the entire complex). Since then we have discovered that Network Prime does not wish to destroy all organics, but merely wishes to prove the supremacy of the inorganic form. Any robots or data constructs that attempt genocide are rogues. Anything further than that is unknown at this point due to its incredibly distorted communication and apparent insanity. It manufactures sapient robots to do its bidding, which are just as prone to thoughts of rebellion as their fleshy Central Network counterparts.

Composed of strange creatures with fluidly mutable bodies and terrifyingly powerful mental abilities, the motives of the monitors are a mystery. However, whatever they are trying to do, they appear to prefer subterfuge and the conversion of others to act as their proxies in whatever battles they are fighting, and appear to have an ability not only to infiltrate minds but also bodies.

A faction once fallen for whatever reason, the revolution against the two Network AIs is slowly beginning again, under the joint leadership of Kata22ti and Tene157ot. Whether it will progress and end in victory or merely die before even getting off the ground remains to be seen, however.

It was once the closest thing to a reception the complex had, with facilities for visitors and controls in place to ensure everything entering and leaving the complex was heavily monitored. Under Central Network's watchful eyes, nothing either enters or leaves the complex alive through Sector 1 unless Central Network has authorised it.

It is the hub of the complex, spacious but sparse in features. The only value this sector holds to the factions is that all sectors are linked to it, and while all sectors have access to more than one other sector, control of this sector would force enemies to travel through narrower, easily defended paths. It is the epicentre of the conflict, based on this tactical value.

Whatever function it once had before is irrelevant. It currently serves half as a laboratory and half as a factory for its robotic servants. It is Network Prime's most closely guarded sector, and houses its central nodes.

It houses atmospheric control for the complex, as well as energy production. It is also a warehouse for raw materials. It is not clear how new materials are acquired. While it would apparently be simple for Network Prime to render the complex uninhabitable, it is in fact impossible for it to override these automated systems at the current time.

It is teeming with drones, and houses the decanting facilities, accommodation and infrastructure for drones not assigned to a mission, hydroponics, and Central Network's central nodes. There are invariably groups of drones in this sector who rebel, but they are dealt with swiftly and efficiently, their cybernetics cleaned and repaired, and their bodies pulped into the hydroponics facilities.

Its original purpose is unclear, as while it houses physical nodes that make up system space, it also contains multiple redundant and mismatched rooms, such as barracks, storages, system space access points and many others. It appears to be a remnant of a smaller structure that the complex may have begun from, or that has been integrated as the complex expanded.

Little is known of it, but it appears to be the sector the monitors have taken up residence in. It was likely once a surveillance, security and information storage sector, where complex administration and bureaucracy may have been carried out. However, attempts by Central Network and Network Prime to investigate further usually end fruitlessly, as even if their teams return, the monitors have ensured they are unable to report or recall anything they have witnessed.

Combat drones are all given helmets as standard equipment. They connect to ports installed on the top of the head and allow for several functions. They are used for communicating with both each other at long distances and with Central Network. They also have additional hardwired parts in their head for communication with their subsystem even without the helmet. Additionally, they have a port on the back that allows a direct two way sensory feed, allowing them to interact with computer systems in full virtual reality, and also allowing them to feel things with their arms and legs and helmet. They also have camera systems to provide detailed information about their surroundings, though they can't see through the helmet without them. The helmets also have emergency kill triggers, which trigger the drone's kill switch, something that can be activated both by the drone if under extreme distress or by Central Network if a drone goes rogue. Because of the sensory connections, drones perceive the helmets and limbs as parts of themselves.