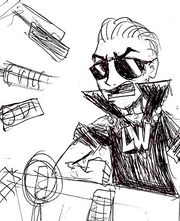 LonelyWorld is the author of a bunch of quests with tiny militant space furries.