Rastin, pissing off people in many times, many places. Fucking troll. 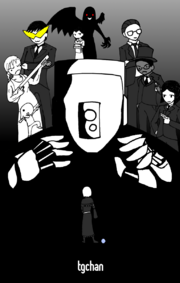 Kara, Nic, and Cora, all against the same few foes.

The Rastin Vresch Continuity is the name of the setting in which Rastin and Vresch are the main villains. The continuity has a lot of things that stay the same between each quest involved, and this page tries to compile those things, as well as help organize what happens when between the quests.

The Rastin-Vresch Continuity consists of Apocalyption, Blaze Quest, Kara Quest, NicQuest, and The Protagonist Dies. Chronologically, Kara Quest and NicQuest take place concurrently. Blaze Quest starts about 80% through the events of Kara Quest, making it mostly a sequel but also concurrent. Apocalyption takes place 16 years after the end of NicQuest, and The Protagonist Dies takes place another 10-20 years after that.

Kara Quest, Nic Quest, and Apoc are the official story on the continuity. Blaze Quest never really got off the ground, and as such, is generally ignored. The Protagonist Dies was, in Bromeliad's words, not very well thought out. Whether or not the events in it are canon is not currently known, so the events within it may not necessarily affect anything in Apocalyption.

In addition to the ones explained in depth below, each of the quests in this setting places a strong emphasis on cause and effect. Everything effects everything else. And the protagonists rarely have any idea just how far reaching the consequences of their actions truly are.

The Science of Magic

The rules of magic are most thoroughly explained in Apocalyption, but in general, they apply to each of the quests. Magic consists of a few schools of magic: Abjury, Conjury, Divination, Evocation, Necromancy, Psionics, and Transmutation. Each one has their own drawbacks, their own focus, and their own mana backlash.

The Seven Sins tend to play a role in the various series, in differing ways. The most prominent example is the Seven Sammich Sinners, who each embody one of the deadly sins. They are all siblings, and play a moderately large role in whichever quest they appear in. Kara Quest has Prevous [Gluttony], Jeslyn [Greed], and Laloth [Sloth]. NicQuest has Tyrael [Pride] and Tamana [Envy]. And Apocalyption has Naveen [Lust] and Kal Royale [Wrath].

In addition, Vresch himself is a demon of Pride, who seeks to be the best for his own sake.

The grand troll. He lives for the sake of living, and enjoys life as much as he can. His greatest joy? Trolling the fuck out of you.

The mastermind behind everything. A demon of technology, his domain is "The creations of man." With how technological the modern world is, this gives him nearly limitless power. His sin is Pride, and he is dead set on being the best in the world... and as The Protagonist Dies has shown, the entire galaxy as well.

The threads arranged in approximate order of happening. Of the 4 quests involved, only Kara Quest is currently completed.