Remember this, this is important.

Apocalyption is in progress, still being updated by Gnome. It is set in the Rastin-Vresch Continuity, along with Kara Quest, NicQuest, The Protagonist Dies, and BlazeQuest. 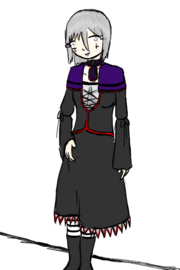 The girl with the Orb, Coralina is a shy girl who's not good at talking, but wants to do the right thing. Whatever that is.

Coralina considers herself a talented mage, with good reason. A completely self-taught conjurer (ironically, this is kinda what led to this whole mess), she appears to be considered a first rate caster even among circles of magic users such as the Sorceror's Guild. She has demonstrated the ability to summon various living beings, ranging from a large Gorilla in a tuxedo named Mr. Bananas to Ace of Ruby Quest fame. The downside to this ability is that summoning anything seals the vision from her only functioning eye, rendering her blind except through whatever it is she has summoned. 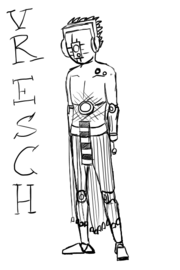 Vresch is an evil technodemon. However, the "evil" part is hotly debated - he seems more like a well intentioned extremist than anything truly evil. His stated goal as far as we know is to create a perfect society in Neotis that stretches across the earth and potentially beyond. The reason for this seems to be nothing more than simple pride: As functioning ruler of the planet, he will not settle for anything less. That, and fostering intelligent thought among humankind results in new technologies for him to toy around with, which he apparently likes.

His abilities are vaguely known, but according to Coralina, Vresch is capable of subverting and taking complete control over any technology he can come into contact with: GPS, launch codes, computers, security systems, household appliances, etc., Vresch can control them the instant he comes across it.

Rastin is was the puppet-ruler of the world, and an epic troll. Also kills people a lot, maybe.

Political leader for the Nihilism Tech Movement. Slightly creepy, might have been hitting on Coralina. Might also be dead, depending on how honest Rastin is.

Political leader for FurReality, the media group of Neotis. A total pervert, she tried to rape Cora. We talked her out of it by using a gorilla.

Apocalyption is about Coralina, a girl who accidentally the whole world, and would now like to do something about it. The quest begins with her finding the Orb of Infinite Psyche, and explaining how she summoned Vresch, a demon of technology, who burned out her eye and then went on to screw over the planet. In chapter 1, she is talked into confronting him, and begins the journey to Neotis, his city.

Chapter 2 brings us to "Vresch Manse," where Vresch offers to let us rule the world. Of course, only as a puppet replacing his current puppet, Rastin, who has fallen out of favor with the people.

In chapter 3, we consider Vresch's offer and are given a tour of what would be our home if we accepted the offer. We also meet the inhabitants of the place, including Jacob, who provides the tour and a pizza.

In chapter 4, we are trolled by Rastin, go to breakfast, and meet Remi, a techno-nihilist who wants everyone to live longer so they can die better.

In chapter 5, we go down to the basement, where Vresch keeps the source of all magic on the planet, which contains and is owned by Hope. We have a nice and cheerful chat with the psychopath, and then reluctantly accept Vresch's offer. To see what happens, Coralina touches the Orb to the source of all magic. Something weird happens, but we sadly don't seem to gain telekinesis.

In chapter 6, we learn about Neotis directly from Vresch himself, and the general consensus is that it would be a pretty cool place to live. We discover Vresch's reason for doing all of this - selfish Pride in owning the best city in the world. Then we finally discover what task he wants us to do: Get a political organization to back up our candidacy for Ruling the City, so we are not connected to the old regime.

In chapter 7, we visit Arcanitch and claim to be a reporter in order to arrange an appointment to talk to its leader, discovering that the Bleeding Hearts are apparently the city newsies in the process. We then discover a protest outside the Sorcerer's Guild over their failure to teach young magicians proper safety procedures which prevents us from investigating them.

In chapter 8, we visit FurReality to speak with Naveen as arranged by Rastin, only to discover that he told Naveen he'd send Coralina over to sleep with her; her attempt to inject Coralina with an aphrodisiac is corrected by means of summoned gorilla. She then tells us a little more about the city, explaining that FurReality controls almost all forms of entertainment and media, and gives Coralina a few bits of advice on the proper use of needles.

In chapter 9, we visit Rastin and discover him playing nerdy card games with his mistress, Roselle. She manages to obtain an agreement that they'll stay out of one anothers' love lives, and then joins in their card game. She departs on friendly enough terms, after Rastin tells her that he loves his job for the freedom it gives him.

In chapter 10, we visit the Sorcerer's Guild and learn a bit more about the nature of magic and their political beliefs. Coralina proves herself skilled enough to pass all their Conjury tests and is offered a teaching position, which she decides to think over and answer about next Monday.

In chapter 11, we visit the Transcendents and discover that they have a low-cost experimental drug shop, where Coralona immediately purchases breast enlargement pills. We also speak with a representative and discover that they're not a very communicative bunch, but they do have experiments in advancing humanity gone horribly wrong on display. Coralina decides not to deal with them further.

In chapter 12, we discuss plans for our ascension with Vresch, then give Hope the body of a very tiny summon and play video games with her.

In chapter 13, we visit the Secluded and Coralina is forced to strip down for a hazmat-suit tour. We are left in her bag with Hope, who promptly uses our apparent connection to her crystal to access stupid levels of power and declares herself the Angel of Salvation, resolving to help the Secluded escape into space and create a perfect world there. She smashes the crystal so that Coralina can keep some of it while she retains her access to her crystal's near-unlimited powers.

In chapter 14, we tell Coralina that everything has gone horribly wrong with Hope, and she moves on with her life by visiting Nihilism Tech. There, she flirts with cute priestesses and gets really angry at the orb. Then she visits Remi and asks her to a movie and enjoys herself.

In chapter 15, Rastin tells Coralina there's a big meeting of the Guild leaders and pickpockets the orb away from her as part of a cunning plan to troll Vresch, then locks us away and goes to a birthday party.

In chapter 16, LeVerne forges the broken orb into a medallion, tells us Rastin was found dead, and takes us to a meeting of all Neotis' guild leaders. He tells the leaders that Rastin was killed by a vigilante, and in his will left orders that whoever holds the medallion after 15 days have passed will be the new dictator of Neotis. We get to choose who starts with the medallion, and choose LaVerne; he tries to ditch us by giving us to Remi, but we stay with him until Kara blows up his getaway vehicle and battles him, forcing him to flee on foot after incapacitating her.

In chapter 17, we discover that LaVerne is a redesigned Teabot made awesome. He encounters Bicardi and attempts to ally with him, then Seras Nightsun who he talks into leaving with questionable success. LaVerne and Bicardi then fight their way into the Men's Club to dump the medallion, and with it a giant target, onto Kal Royale. Kal gleefully accepts.

In chapter 18, Kal resolves to kill the other dangerous leaders before they can kill him. He decides to go after Dr. Ivanis Simic of the Transcendants, and slaughters his way into a secret underground lab to confront him, where Simic offers to ally, providing Kal with real-time intelligence and the only map of Neotis in existence. Kal refuses, beheads him, and puts his brother in charge of the map- only to be ambushed and have his hand blown off by Michael Portman with a sniper rifle as he leaves.

In chapter 19, we leave the orb's perspective and return to Coralina, who has left Neotis having decided that the last week was a total bust. She resolves to summon another demon and fix all this that way, and attempts to summon Tys, a demon of Void, to help her. Unfortunately, he refuses to help her and she proves unable to bind him with her current skills.

Vresch was a participant in Fight Quest.