A Strike Cruiser belonging to space marines of the Imperial Fists chapter is called to a nearby planet on which the Governor leads a relatively minor rebellion. Two squads of space marines are deployed into the city to lead the guard forces. The protagonist, Sergeant Reinhardt, is in charge of one of these squads.

Initially, the source of the rebellion is unknown, however, upon more involved contact with the enemy, it is revealed that they are under the influence of the Chaos God, Khorne. Many of the once-loyal PDF soldiers have turned into little more than berserkers. After clearing out a building in the city, the space marines create a firebase, wherein their plans are developed and discussed. Simultaneously, Apothecary Darius and Devastator Venar fight to clear the dormitory sector of rebels, making their way to the Imperial Cult shrine. Reinhardt meets with them soon after.

In the shrine, the three space marines discover a monument in dedication to Khorne being built. Over-watching the construction is a chaos space marine of the Knights Of Blood warband. The space marines mistakenly believe him to be dead, after having shot him, which results in Apothecary Darius' death. After defeating the renegade, Reinhardt proceeds to eat Darius' brain, utilising his special Omophagea organ to learn how to operate the Apothecary's Reductor tool, allowing him to harvest Darius' Progenoid glands.

The remaining space marines are thrust into a large firefight with numerous traitor guard soon after, the battle ending when Lieutenant Joshua Esus, a stormtrooper, arrives with the Chimera tank, its heavy weapons butchering the traitors. 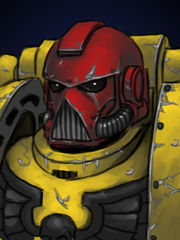 Main protagonist of the quest, Sergeant Reinhardt leads one of the two squads of Imperial Fists caught up in the rebellion of the planetary government. A veteran of many battles, he is a shining example of his chapter's reputation for quick-thinking resourcefulness. He has a tendency to be slightly detached from the humanity which he is charged to protect, sometimes judgmental of the lesser troops around him. 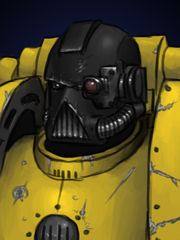 Leader of the other space marine squad deployed into the city, Sergeant Jingles is the first other space marine encountered in Space Marine Quest. He is a rather jovial space marine; at odds with Reinhardt's staunch seriousness. He is also known to show arguably foolhardy acts of heroism, as evinced by the many scars and augmentations he bears on his body. Most notable is his bionic left eye. Reinhardt and he share a friendly rivalry. 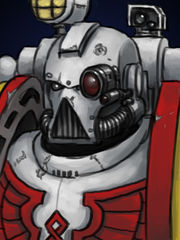 Brother-Apothecary Darius is one of the more senior members of Reinhardt's squad, and has been with the sergeant through many campaigns. He is quite finicky, and much prefers more-qualified personnel than himself to make battlefield decisions. He is killed by a Chaos space marine within the desecrated Imperial Cult shrine. 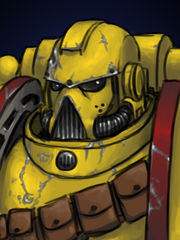 A Devastator in Jingles' squad, Brother Venar draws the very line that defines when an Imperial Fist goes 'too far.' He frequently disregards Codex regulations in favour of doing the job 'his way,' which is to say, as violently and brutally as possible. He often loses chapter equipment, requisitions munitions not standard for his role, and has no fear of collateral damage. Despite his quirks, Brother Venar is a worthwhile ally. 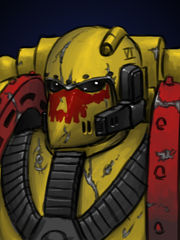 Brother-Veteran Moreus is an old Imperial Fist, and a long-time friend to Brother Reinhardt. Although actually part of a veteran unit, he frequently organises to be paired with Reinhardt if the situation permits. He wears an older, MK. VI 'Corvus' suit of power armour, the helm of which is emblazoned with the visage of a skull. He uses a power axe in combat.

Appearances (real and heretical) by the cast Inside the Quest.